Naughty Raven is a special website for the unique political artwork of Kira Od. It is called “Naughty Raven” because Ravens often do provocative things that can get them in a lot of trouble. Naughty Raven’s pronouns are, “Republican Leadership, Go Fuck Yourself.”
Roe v. GOP Leadership is not a call for violence. It is an artistic depiction of defiance and self-defense against a brutal Republican campaign to subjugate women. It represents a patriotic demand for Democratic change and is a reminder that as full citizens, American women are entitled to protect themselves and control their lives. It was inspired by Russian Warship, a work of art immortalized on a postage stamp by Ukrainian artist, Boris Groh. 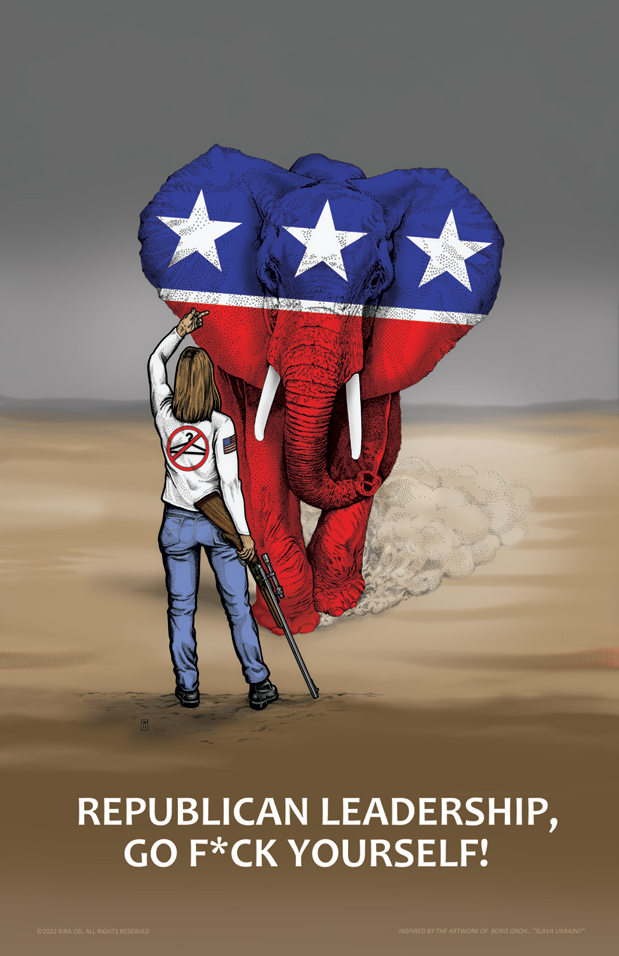 Against Abortion is Naughty Raven’s way of telling Fundamentalist Republicans to stop pretending to put themselves in Everywoman’s shoes.

Three weeks after Vladimir Putin’s murderous invasion of Ukraine, he staged a massive propaganda event where he ordered his citizens to punish not only Ukrainians, but any Russian who refuses to uphold his lie that Ukrainians are “Nazis.” Russian flags waved approvingly in the stands, even though the most obvious Nazi there was Putin, himself. Naughty Raven created Putin’s Flag so his fans can give him the honor he’s due, next time they cheer him on. 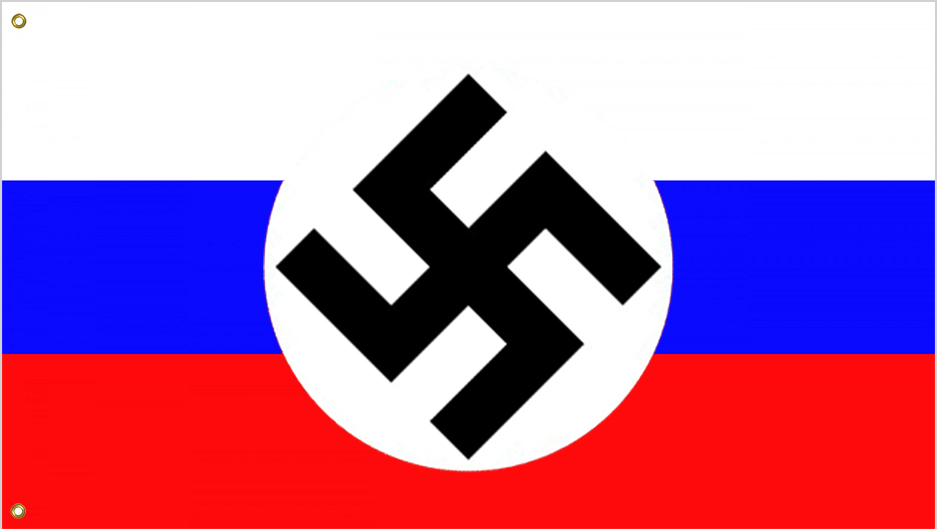 Naughty Raven’s friends are nice, but many get “uncomfortable” when they see black men approaching them, no matter how the men are dressed. This, and everything that flows from it, must stop so that justice, fairness, and restitution can fulfill the promise of America. Swallow your insecurities and reach out! Expect to be met with open arms? Don’t. Be kind, be humble, listen, and EARN your welcome.

Naughty Raven sent Joe Biden a small care package of stickers, magnets, and t-shirts in September, along with a letter of encouragement and pictures of our banners at marches. The day before the 2020 election, this thank you note arrived. To ALL who marched, plastered stickers, and peacefully protested for 4 brutal years: THANK YOU, from the bottom of our hearts…and the top of the Presidential ticket! 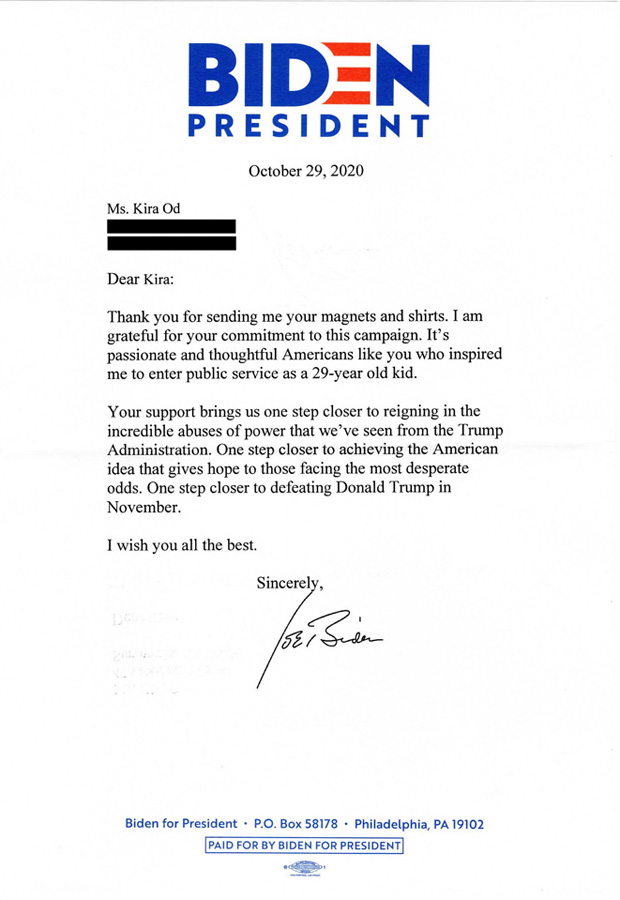 Beware the Wrath of Naughty Raven! The 2020 election may be upon us, but Naughty Raven remains enraged over endless Republican misdeeds. Time for one more work of protest art: 2020 FALL. Vote!!! Send these bastards where they belong. (Pompeo and Graham are missing because there’s only so much sagging corpulence a woman can bear to see.) This piece is dedicated to the late John Lewis, whose profound courage still lights the path to justice. 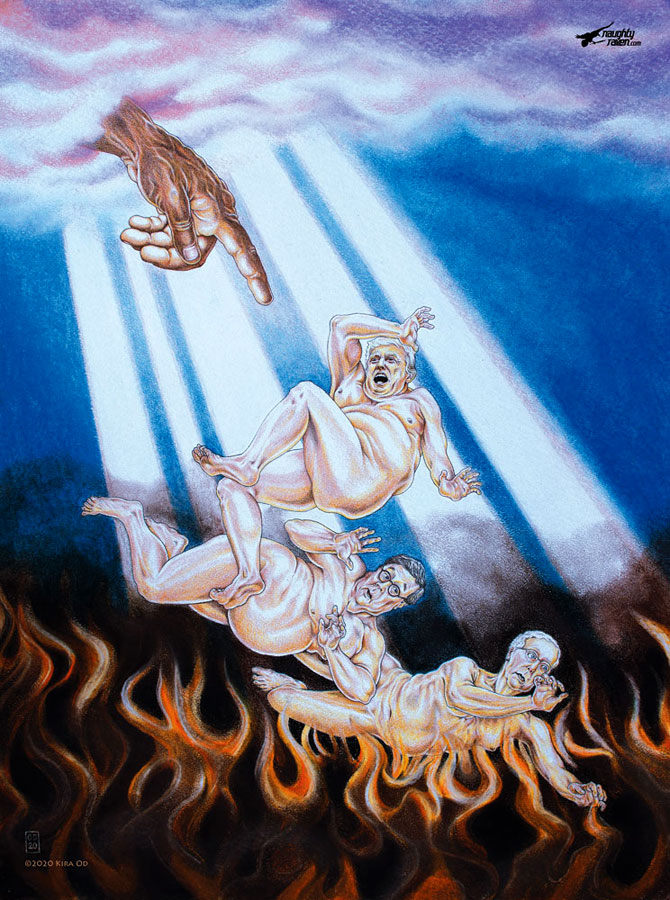 ATTENTION!!! This Madman-in-Chief Special Edition, simply called, Sick President, is a sober reminder that the psychopath in the Oval Office doesn’t care if you live or die. Rallies are fun, but if you don’t register and actually vote, your parents will die. Maybe you hate your parents, or maybe they’re already dead. In that case your favorite relative will die…and Naughty Raven will jump from your screen and peck your eyes out. 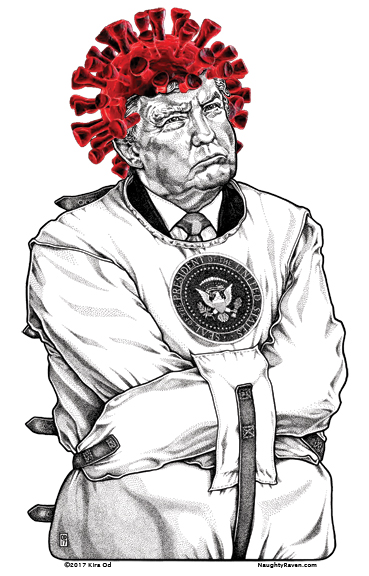 As the ultimate white collar criminal, Trump must account – and pay dearly – for the havoc he has wreaked on this nation and the world. Hence, Convict Trump. Is the title a command to action or a statement of future fact? You be the judge. Naughty Raven dedicates this piece to the late Elijah Cummings, whose passionate voice for a government that serves ALL its people – not only the rich – will be greatly missed.

Can you find the real President in Trump Trumped? (Hint: One has his name on a ribbon; the other goes by his Justice Department pseudonym.) 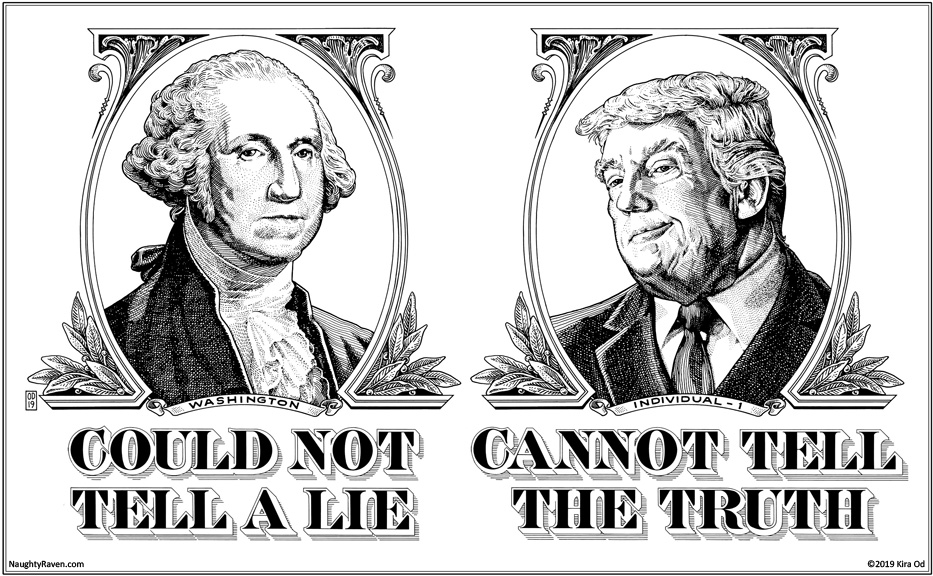 True Trump is Naughty Raven’s simplest and most straightforward portrait of the President so far. Wake up, America: Do you really think a compulsive liar can lead our country to greatness? 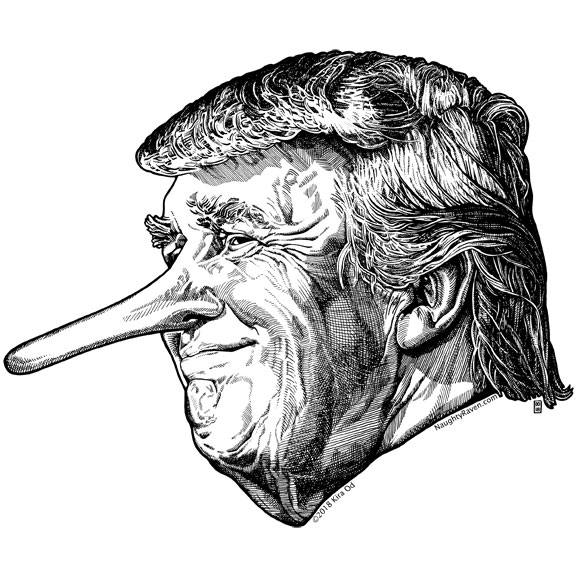 Donald Trump is an obsessive “tweeter.” He tweets lies and insults, mostly; but on occasion he uses Twitter to actively encourage hate and violence. This doesn’t just offend most Americans; even his own staff wishes he’d keep his thumbs to himself. Naughty Raven’s solution? Trump Thumb-Tied. 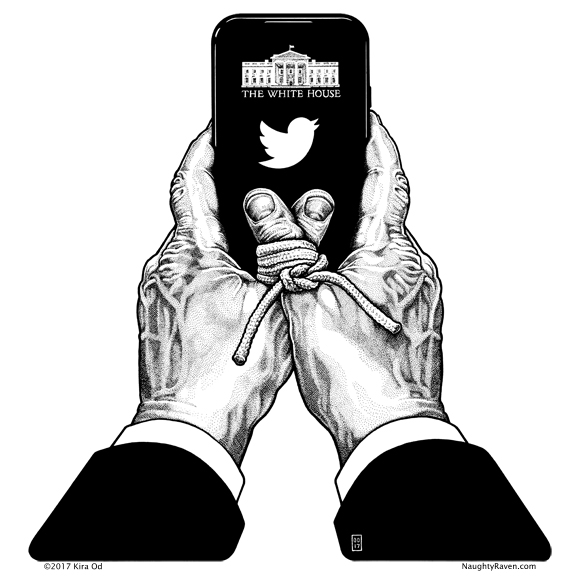 Madman-In-Chief is what you get when an angry, ignorant, unpredictable narcissist is elected to our nation’s highest office. 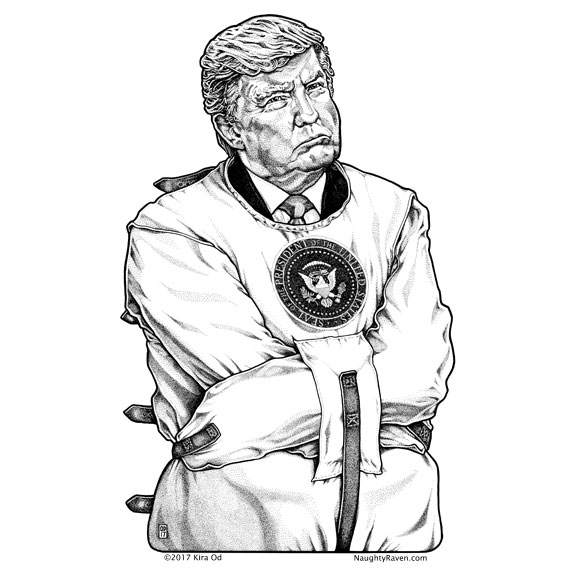 The thin-skinned, delusional man-baby currently playing President loves to give a ‘thumbs-up’ when he thinks he has his audience fooled; but he can’t fool Naughty Raven. Naughty Raven knows that Trump’s ridiculously high self-regard makes him the biggest sucker of them all. That’s Thumbs Up Trump. 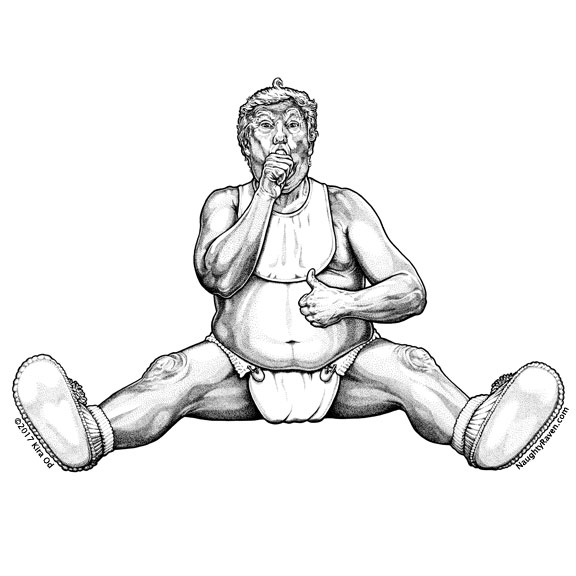 What’s in a meme? Everything. A meme says it all without speaking a word. That’s Trump Silenced.
Devoid of respect for truth, law, and human decency; Trump sows chaos and hatred every time he opens his mouth. He will destroy our nation if that’s what it takes to hold onto his power. 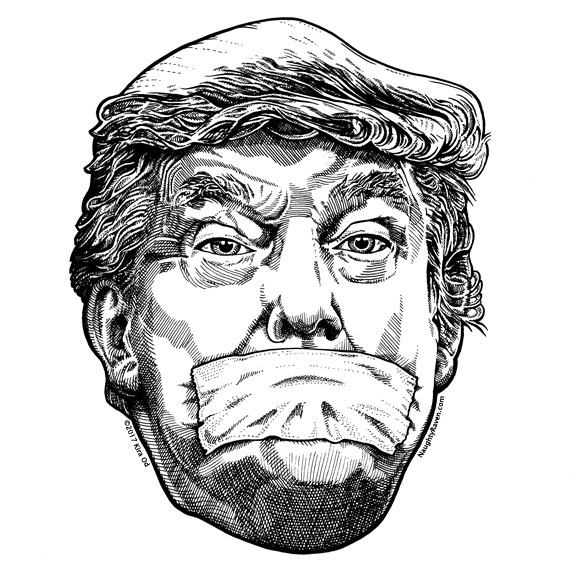 When we feel disgusted by American politicians, Adam Schiff reminds us that governing is not a game, and he puts his committee where his mouth is. Adam Schiff Rolls Up His Sleeves was made to honor his courageous and consistent work to preserve and enforce the checks and balances embedded in our Constitution. This portrait was printed on a huge banner, displayed onstage at a fireside chat, and presented to him as a gift. Click the About Us page to see Congressman Schiff and Naughty Raven kidding around under the artwork. 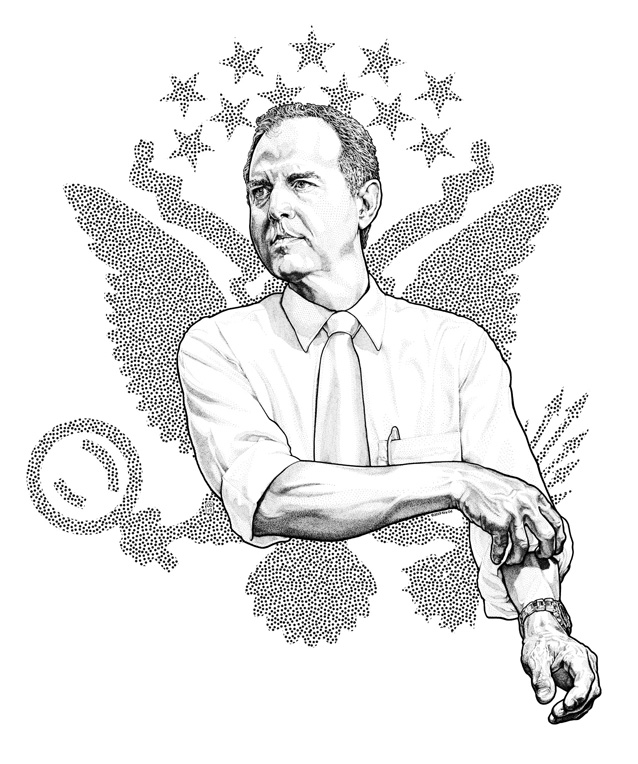 Removal may be remote, but impeachments are forever. Own a piece of history and support lead impeachment manager Adam Schiff by buying a t-shirt or mug featuring art by Naughty Raven! Click here to go to Congressman Schiff’s website and store. 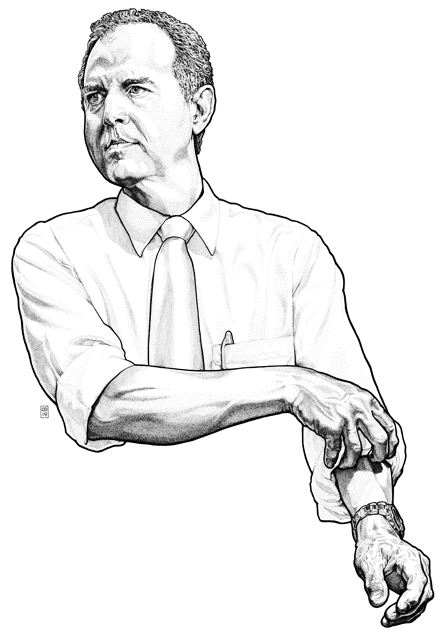 You run for Governor of Georgia. You lose, barely and unfairly, to the official controlling the election. Do you slink away, shamed by your loss? Not if you’re Stacey Abrams! She ran to right wrongs, and true leader that she is, didn’t stop. She formed new organizations — Fair Fight and Fair Count –- to ensure that every American’s vote is counted and that census-based appropriations will be correctly assigned after 2020. Naughty Raven celebrates this brilliant visionary with Stacey Abrams Knows What She’s Talking About. 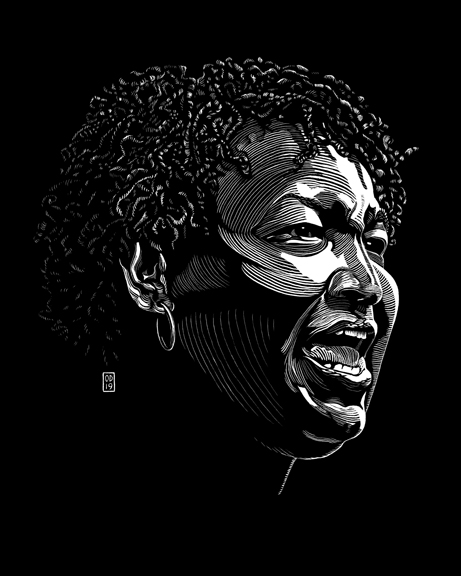 After drawing several museum quality portraits of a con-artist President, Naughty Raven shifted to something simpler: Signs for Decency inspired by Congressman Adam Schiff’s amazing “You might think it’s okay” riff.
True journalists work hard and check their facts. They are shining lights of democracy; not “enemies of the people.” 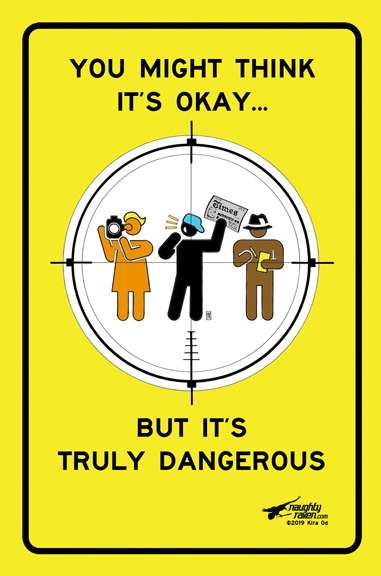 Neo-Nazis and White Supremacists have no redeeming social value. Not only aren’t “some” of them good people; NONE of them are good people. 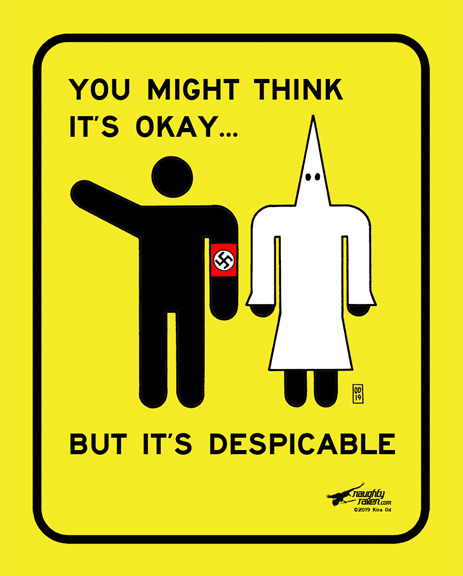 Naughty Raven cannot comprehend a policy as stupid and inhumane as taking young children from their refugee parents “to discourage immigration.” 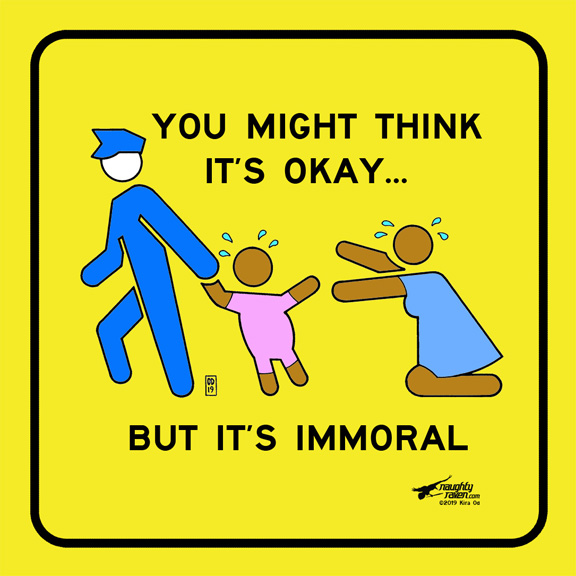 “Give me your tired, your poor, Your huddled masses yearning to breathe free, The wretched refuse of your teeming shore. Send these, the homeless, tempest-tossed to me, I lift my lamp beside the golden door!” Real Americans know that LIBERTY — not a wall — is what we fight and die for. 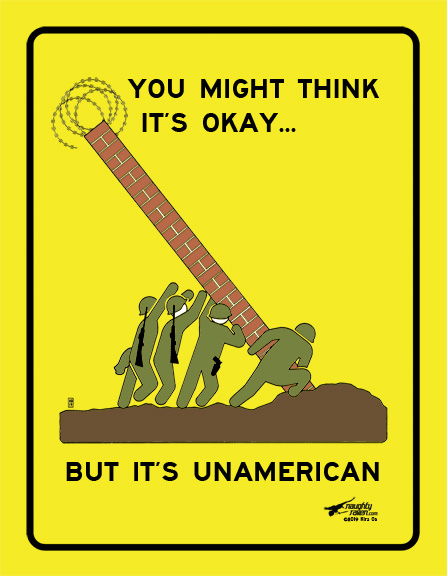 Shortly before the 2016 Presidential Election, VOTE was frantically scribbled onto a big piece of scrap foam core. The text of the work is too dense, unpunctuated, and lengthy to include here. But in the Stars it riffs, “I have struggled a lifetime to be respected I have fought a lifetime to be heard I have spent a lifetime honing skills to make myself more articulate I have worked a lifetime to be strong I have studied a lifetime to think more clearly I have searched a lifetime to be more understanding…” The word, “VOTE,” is filled with the four words, “It can happen here,” repeated over and over. And the red Stripes at the bottom make up the rant: a profane outrage at the lies, racism, sexism, and hate that Trump used to propel himself into the Presidency, with repeated comparisons to Hitler. 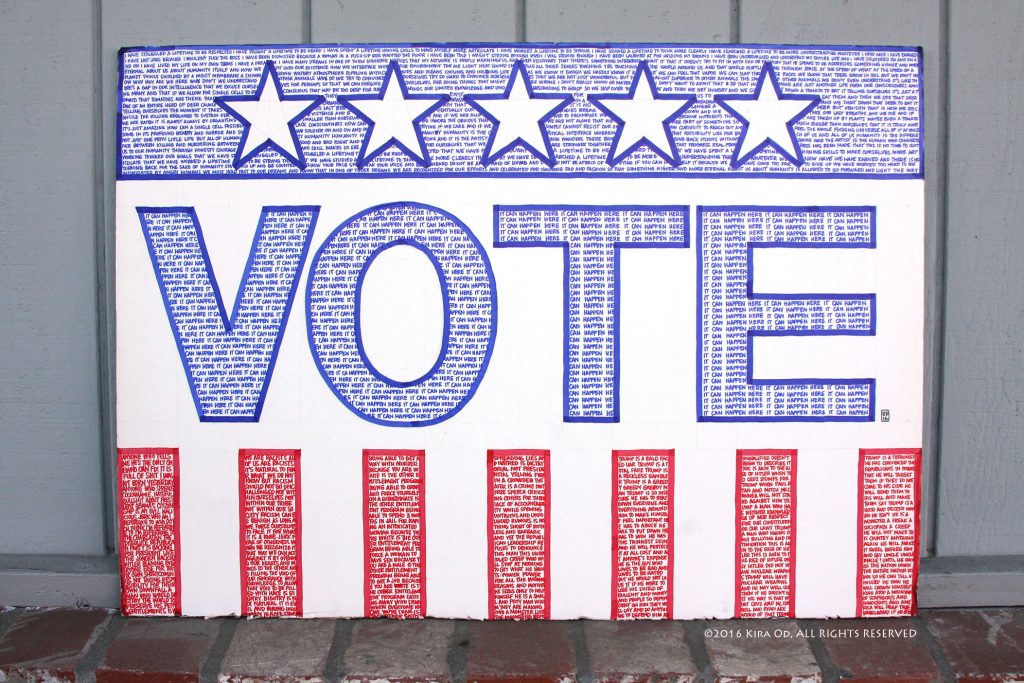 VOTE Riff-Rant
What better way to say that invading Iraq was stupid than to tattoo portraits of George W. Bush and top members of his administration onto whole chickens and then photograph them in custom settings? Prints of these Fowl Art pieces were sent to each of them, accompanied by letters of protest against their ill-considered war. 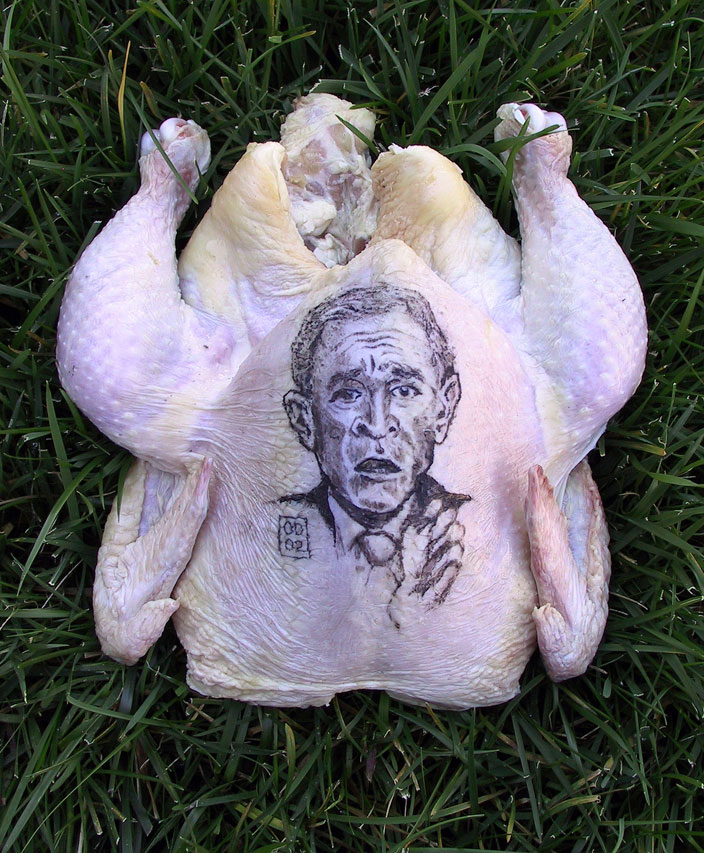 Bush in the Grass 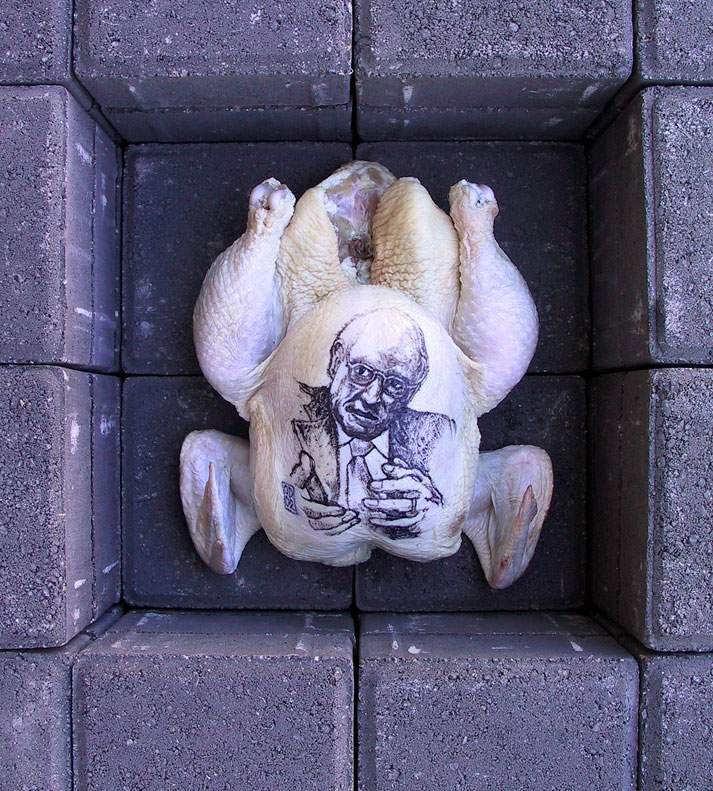 Cheney in His Bunker 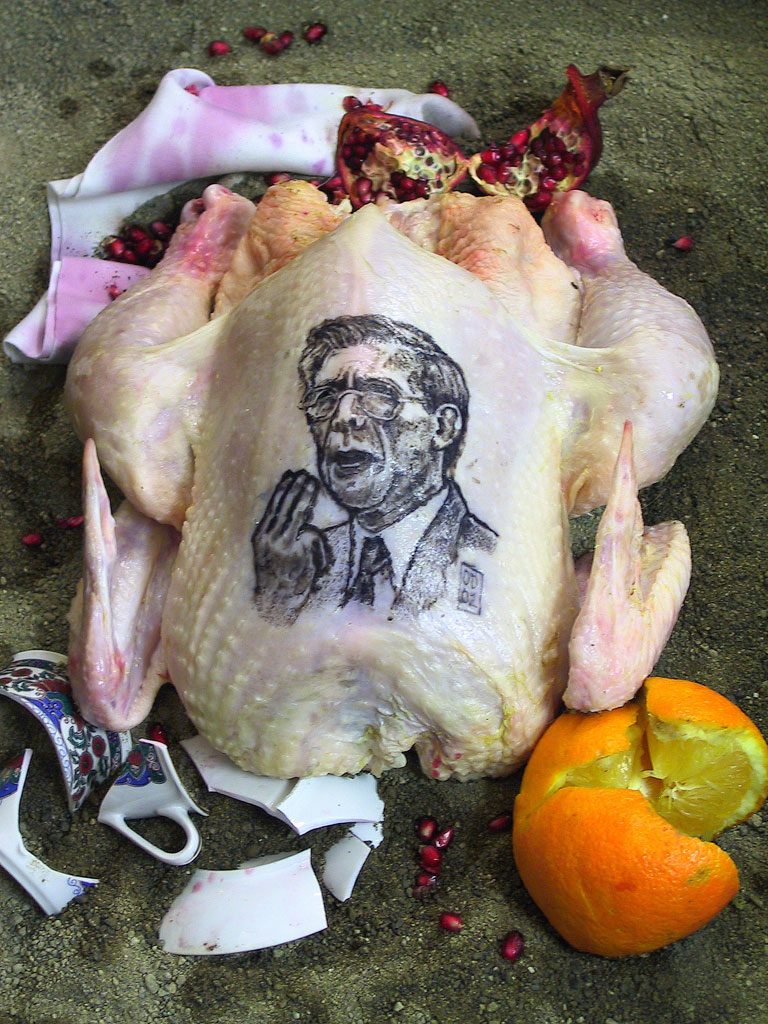 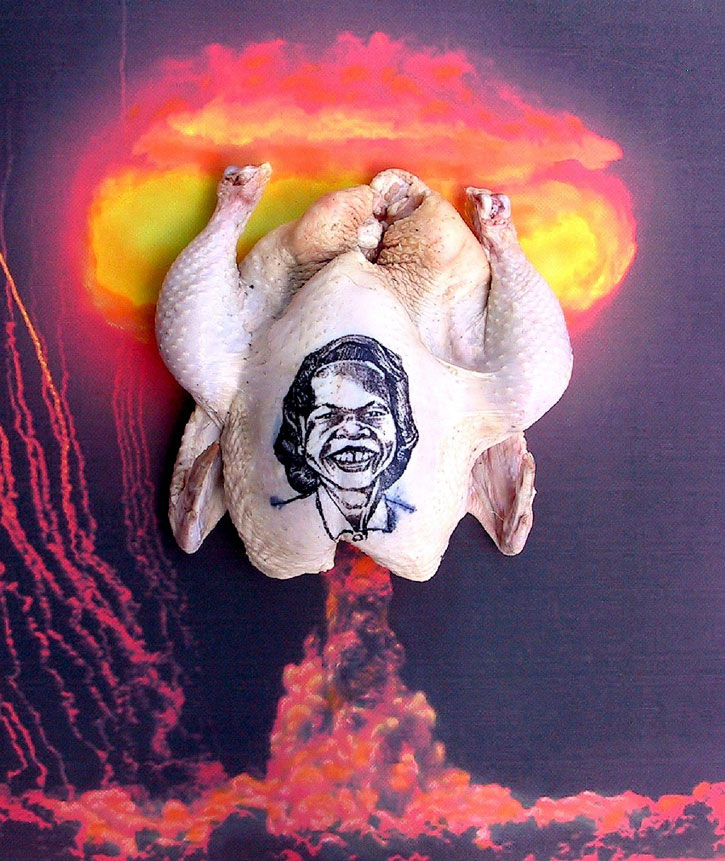 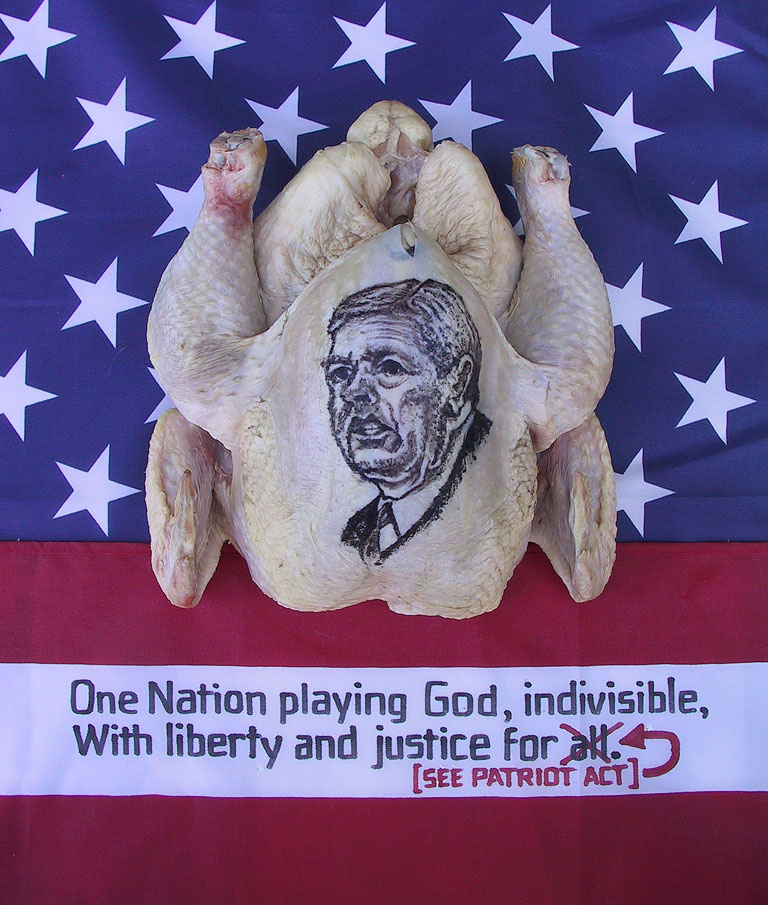 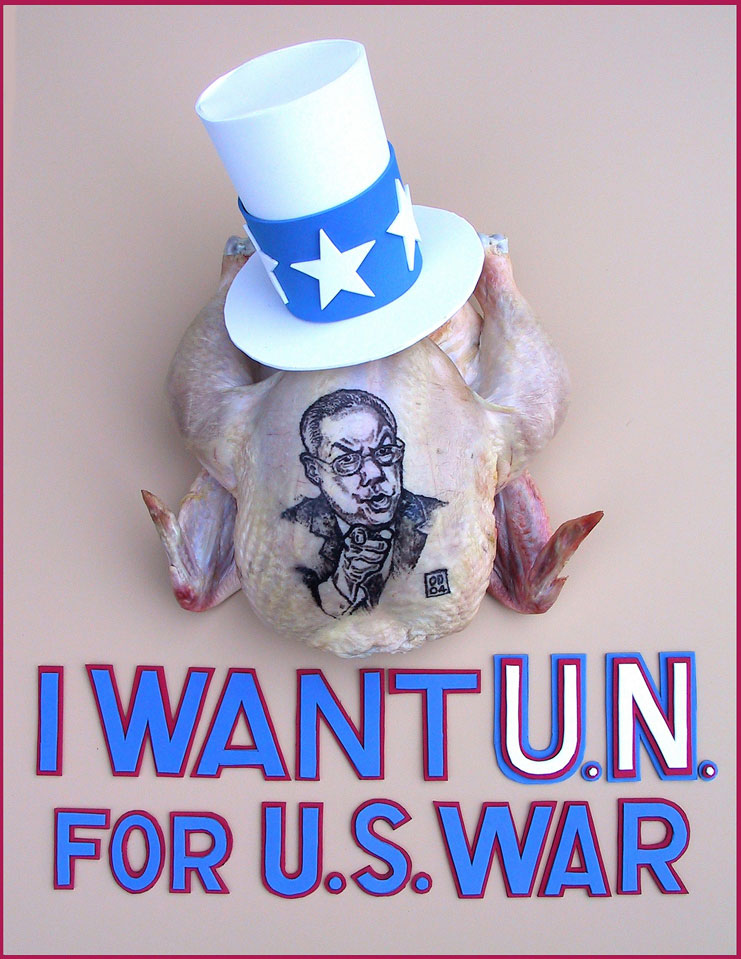 Uncle Powell
Back in the 90’s I helped friends with a ‘zine called, DPN, or, “Diseased Pariah News…a patently offensive publication of, by, and for people with HIV disease (and their friends and loved ones).” The humor was outrageous and dark, but the tone was distinctly fun. 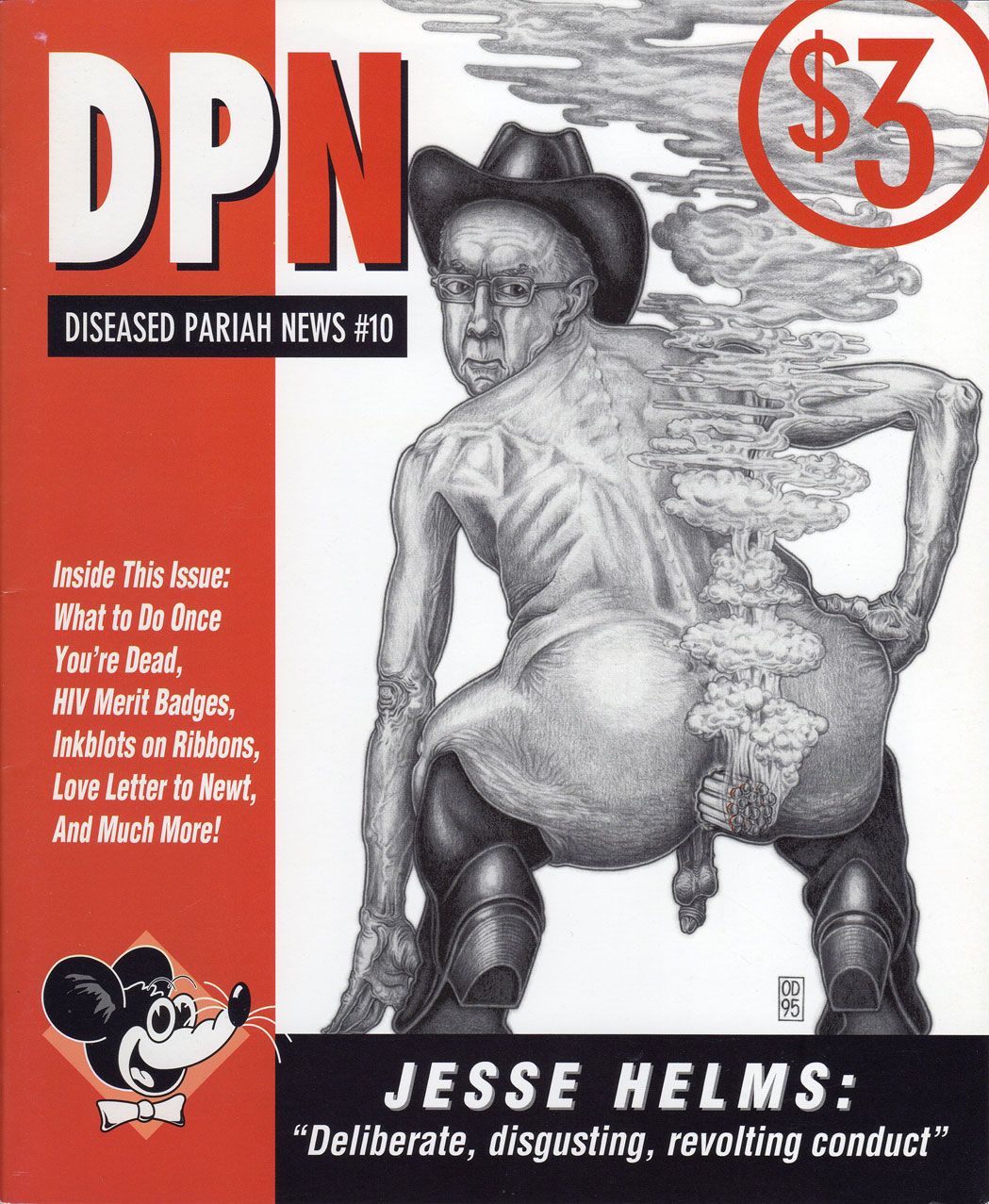 The August Senator from Philip Morris 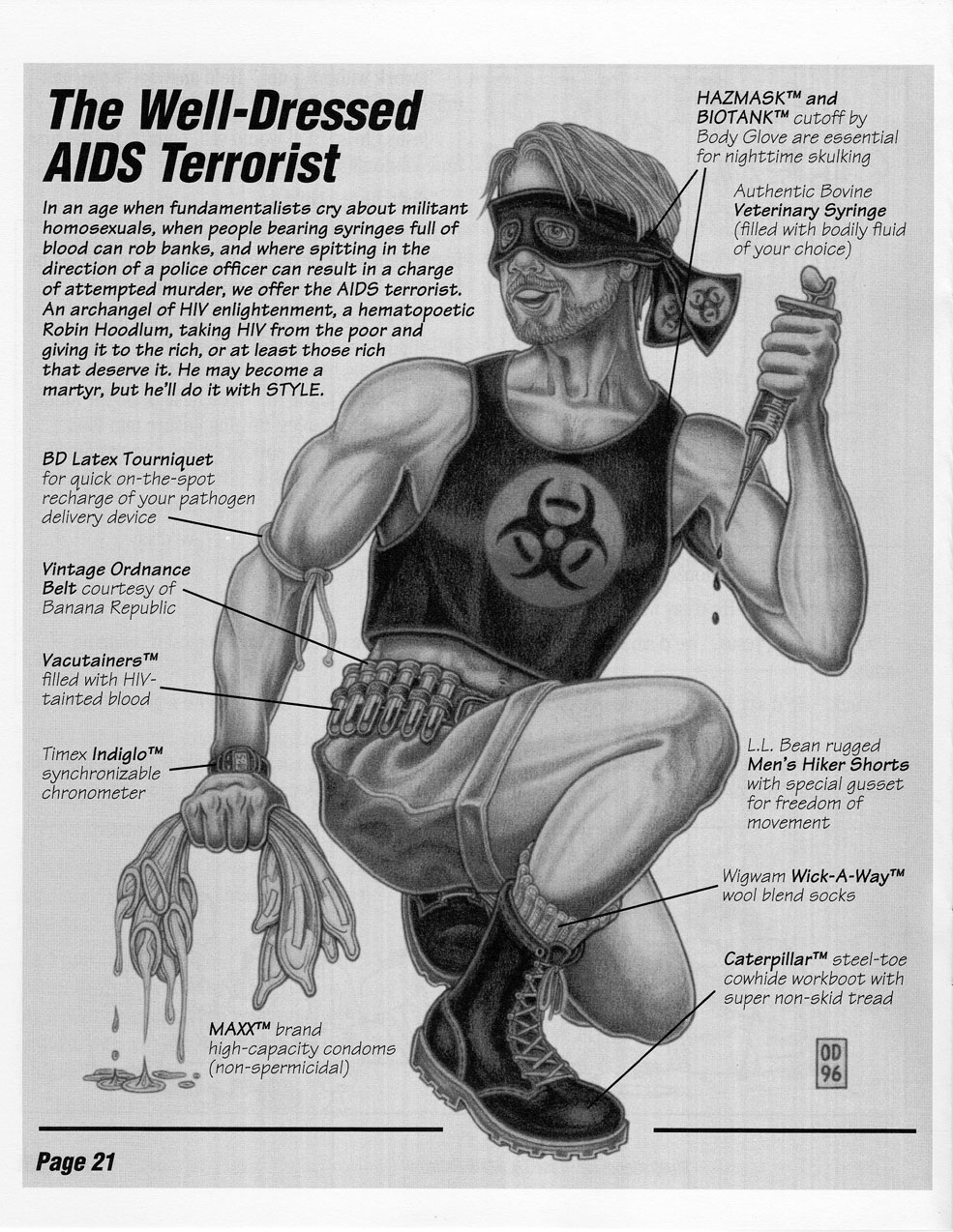